Energize Shropshire, Telford & Wrekin, the County Sports Partnership, is developing its strategy for the coming years and gathering feedback from as many individuals, groups and organisations that have an interest in sports and physical activity as possible – be it as a provider of activities or as an organisation which uses or would like to use sport and physical activity to engage their customers, users or employees.

Energize are using a very short online survey to gather feedback which should take no more than 5 minutes to complete.  Follow this link to complete the survey: https://www.surveymonkey.com/s/energizefeedback2013

The survey will remain open until Monday 6th January 2014.  Energize would like to thank you in advance for taking the time to complete the survey – your feedback will help us shape how we work and deliver our services locally in the coming years.  If you have any questions please contact us on[email protected]

We were all inspired earlier this month by Ben’s presentation at our meeting this month. we thought you would like to know this breaking news. Our Ben is putting Shropshire on the map and should be very proud with the latest news He has received.

Ben has now taken a leap towards his goal of competing at Rio 2016 Paralympic Games after winning a place on an elite training programme!

Ben is going to be training with some of the best disabled athletes in the UK after being selected to take part in UK Sport’s World Class Performance Training Programme which has around 90 athletes taking part.

Ben is somewhat shocked by this call up which has come 12 months earlier than he anticipated.

Ruby has sent a message of congratulations to Ben from SDN. I hope we can follow his progress. My words at the meeting ” Ben is going places” appear to be on target.

“Awe Inspiring” just two words that have been used to described what? Have a read to find out!

SDN Members’ Meetings are always interesting, but sometimes they go way beyond that and the only adjective that will do is ‘great’. So it was at the meeting just before Christmas, where the three guest speakers kept the audience of about 45 members spellbound.

First up was a Shropshire soldier, Captain Nick Beighton of the Royal Engineers. Nick lost both his legs and suffered massive internal injuries when he trod on a landmine while on patrol in Afghanistan. Before that he was a very fit and active young man – with mountaineering, skiing, biking and many other high energy pursuits on his agenda. He lived life to the full.

Now, just four years on from losing his legs, He lives life to the full, with mountaineering, skiing, biking and many other high energy pursuits on his agenda. And for good measure he rowed for GB in the Paralympics London 2012 with him and his partner being beaten to a bronze by just 0.04 of a second in a photographic finish.

Nick didn’t paint himself as some sort of superhero, bouncing back against impossible odds. He left the meeting in no doubt about the physical, mental and emotional trauma he has gone through – and is still going through (his most recent operation was just two weeks before the meeting).

But his attitude to disability is that you just have to get on with life. Don’t dwell on what might have been, make the most of what is.

That philosophy also sums up the attitude of the second speaker, wheelchair racer Ben Rowlings, from Newport, Shropshire. A lifelong cerebral palsy sufferer, Ben described how his mother had brought him up to be tough and to solve his own problems.

‘When I was little, I fell over in a shop and she didn’t pick me up, which shocked people around us. But picking yourself up is what matters. And that attitude has helped me achieve what I have done so far both in life generally, particularly at school, as well as in sport.’

Ben trains very hard and follows a strict regime. He is happy to travel to get the best coaching available and goes to Coventry every week.

The achievements are already numerous, but Ben, who is only 19 years old, has a list of goals that he is working towards, both to compete against others – perhaps even in the next Paralympics – and against himself.

The third speaker began by describing himself as physically ‘at the other end of the spectrum’ to Ben and Nick. Tony Lawrence is a fully qualified Tai Chi instructor who specialises in teaching Tai Chi for arthritis sufferers & other disabilities. Tony has his own disability.

After a few introductory remarks about himself and the origins of Tai Chi as a form of martial arts in China many centuries ago, and the various forms that it can take, Tony put the meeting through its paces, encouraging everyone to try a few moves and get the feel of Tai Chi.

The type of Tai Chi he teaches to arthritis sufferers can be done either standing or seated, which is ideal for people with mobility problems.

An epic raffle, including two Christmas hampers, a Christmas Cake, Christmas Pudding and a large basket of Fresh fruit plus many other seasonal goodies, followed the three speakers. Many thanks to all those who made such a raffle possible as it boosted funds by some £82.

The next Members’ Meeting will be on Thursday13 March in Oswestry. More details will be published well in advance but if you want more information about our meetings please  contact |our Honorary Secretary Russell Price at [email protected]

Hft’s Family Carer Support Service has made a series of short videos about PIP.

The videos give information about:

Rhianon Gale Family Carer Support Manager says: “We hope that you will find the videos useful and we would be grateful for your feedback. We are planning to make more videos for family carers in the future – it would be really helpful to know which topics you would like to see covered in video format in the future. Please do reply to this email and let us know! “

Links to the PIP videos:

PIP 1: Rules and how people are assessed

PIP 2: How to fill out the form

PIP 3: Going to a face to face assessment

PIP 4: Your award and appeals

Don’t forget, we also have our ‘Guide to benefit changes’ which is regularly updated. Find out how to get a copy, or download it from: www.hft.org.uk/benefitsguide

We have more events about PIP planned for 2014. Please see www.hft.org.uk/pip for dates and locations.

On behalf of SDN Management Committee we would like to send all our supporters and members a Christmas Card to say Thank You for all you have done in helping us support people with disabilities throughout Shropshire during the past year – but that would be an awful lot of cards and stamps, so we hope that you like this one – just click on it to take a look. Have a very Merry Christmas and we look forward to your continued support in 2014. Sonia – Chair SDN 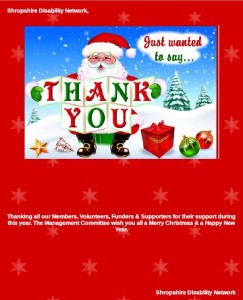 Nominations Open in February for the UK’s Largest Diversity Awards!

The National Diversity Awards in association with Microsoft is a celebration of the outstanding achievements of positive role models and community organisations across the UK.

A collection of some of the nation’s most inspirational and selfless people gather each year to recognise the country’s rich tapestry, honouring those from grass root communities who have contributed to creating a more diverse and inclusive society,

If your organisation is a strong representative of true diversity or you would wish to nominate then please do not hesitate to get involved with this initiative.

The National Diversity Awards is a prestigious black tie event sponsored by companies that have developed an open and inclusive culture and are striving to build a more diverse and stable workforce.

The concept for The National Diversity Awards arose when The Diversity Group identified an urgent need for more positive role models to be actively promoted, empowering and inspiring the wide breadth of communities across the UK.

The National Diversity Awards have gained support from the likes of Stephen Fry, Brian Dowling and several paralympians such as Jody Cundy, Sarah Storey and Ade Adepitan.

If ever there was a time to celebrate and elevate the truly staggering diversity of talent the UK has to offer, it is now – opportunities are thin and deprived communities need motivation and inspiration.

Nominations will open Monday 03rd February for you to put forward your local heroes and organisations.

You will be able to nominate through the website above, or a nomination form please email [email protected]

We have received a copy of the 36th Newsletter from Shropshire’s Support and Information Portal for the voluntary, community and social enterprise sector. You can view a web based copy of the newsletter here: (goes to external website)

December’s health and Wellbeing Newsletter is now available. Click the link to see the web version.

SDN have been given another generous donation – but it is not so much the amount as the circumstances that make this one very special. The amount is £100 and the giver, indirectly, is everybody in Shropshire and Powys.

Our arch fund-raiser Ruby Hartshorn had applied earlier in the year for support from the Harry Tuffins supermarket group, which have several stores along the border and last year became part of the Midcounties Co-operative. 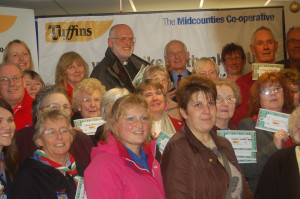 A letter duly arrived inviting Ruby along to the Churchstoke store to receive a cheque. Little did she realise what a wonderful afternoon awaited.

There were 101 cheques to be presented to community groups of all sizes and persuasions throughout the region, from disability groups to the Scouts, from pre-schools to over-60s clubs. While the supermarket went on with its daily work of serving customers, one end of the vast room was buzzing with excitement, plus mince pies, chocolates and mulled wine, as representatives from the many groups gathered.

Tuffins had £42,384 give away – the result of the company’s annual Fun Day in August – and they really did it in style. Most of it was being presented at Churchstoke by the Chief Executive of Midcounties Co-operative Ltd Ben Reid OBE and the former owner of Harry Tuffins Roy Delves. Two similar but smaller events were also planned for other stores.

The generosity was wonderful and the presentation stylish, but what made it all possible was the fact that every year Tuffins turn their many managing and retailing skills to work creating the Fun Day. And they must be pretty good at their job. To raise more than £40,000 in not much more than an afternoon is a tall order! Tuffins really live up to their claim to be rooted in the community.

Ruby with the Tuffin’s Donation

Ruby Hartshorn with the other recipients

Listening to the presentations

The roll out of PIP and Universal Credit is continuing and you are telling us that many of your clients are being sanctioned.

Headlines this month are-

Duration 1 day – 10am- 4pm. Cost £155/£125/£210  Course includes course guides for each participant,  Benefit Rate Posters,  certificate of attendance, lunch/ refreshments,  a post course on line discussion forum where staff can get one to one help with an expert and regular monthly newsletters.  5.25 hours Continuing Professional Development(CPD) points for solicitors attending.  Social workers can choose to count courses towards their professional development.