Many of you will know of Kelda as she is a familiar name on our website with “Climbing Out” a Charity that Kelda runs. As a child Kelda always dreamed of taking part in the Olympic Games, either as a horse ride or later in life in the netball team saw her play at national level.

Kelda (now aged 41) had a life changing accident some 12 years ago when She was hit by a falling haylage bale while looking after her horse. Thinking her dreams were shattered due to one of her legs being so badly crushed, it left her unable to walk let alone run! Kelda openly admits she tried to hide from the problems her damaged leg caused her, letting people think She was either unfit or just non-athletic. However her involvement working for “Battle Back” organisation and setting up “Climbing Out”, both aim to give people a new lease of life after injury or illness. They also gave Kelda hope. Now Kelda is back on course to achieve her lifelong ambition to compete in sport at an international level but not the Olympic Games but the Paralympics! Rio 2016 is now a realistic possibility for Kelda who just 4 months ago first sat in a paracanoe! Not only that, it was the first time that Kelda had accepted her leg injuries!

At SDN we have a lot of contact with Kelda and She has agreed to blog for us about journey & ambition to get to Rio in 2016. She hopes to give us a weekly blog but we must all remember that Kelda has much training to do & a charity to run so we all appreciate that some weeks may  be missed-anyway this is the start! 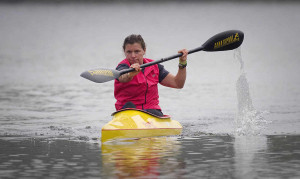 Well, just finished my first week back training after the 3 week break….and what a week it’s been! I felt completely different in the boat – the break has done me so much good. I’m feeling strong and solid, and the confidence is growing in bucket loads! Where, before the national, I couldn’t keep up with the other GB athletes, I’m now up there with them….I even finished in front one day!

We’re working hard in the gym….the guns are getting bigger!

Unfortunately I’ve got to work this week, so training will be a bit restricted, but feeling very excited about what this winter will bring!